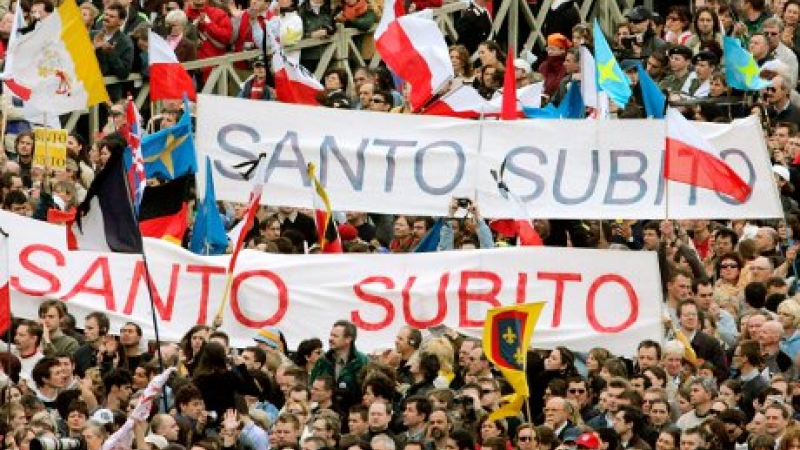 This Church constituted and organized in the world as a society, subsists [“subsistit”] in the Catholic Church, which is governed by the successor of Peter and by the bishops in communion with him, although many elements of sanctification and of truth are found outside of its visible structure. These elements, as gifts belonging to the Church of Christ, are forces impelling toward catholic unity.”

The meaning of this expression “subsistit” was clarified in the Responses to some questions regarding certain aspects of the doctrine of the Church, published by the Sacred Congregation for the Doctrine of the Faith in 2007.[1]

The text attempts to clarify that the Church of Christ is identical to the Catholic Church precisely because the latter possesses the fullness of the means of salvation which define the first as such; the verb “subsistit” also signifies that the presence and action of Christ’s Church extend beyond the limits of the Catholic Church, that is , wherever there are elements of truth and sanctification that belong to Christ’s Church. The parallel passage of the Decree Unitatis redintegratio, section 3, affirms that this presence and action of Christ’s Church are formally actualized through the separated Christian communities, which the Holy Spirit does not disdain to employ as means of salvation (“tamquam salutis mediis”).

The meaning of “subsistit”

Following all his predecessors, Pius XII teaches on two occasions, in Mystici corporis [2] and in Humani generis [3] that the Church of Christ (or His Mystical Body) and the Roman Catholic Church are strictly identical. If we take this traditional teaching to its furthest conclusions, we must admit that this unity of the Church results from a social order, which is the order of unity of faith and of worship, as established by the authority of her divinely instituted hierarchical government. Only the Catholic Church is the Church willed by Christ, because only the Catholic Church is governed by the Vicar of Christ, who causes the social order willed by Christ to reign. Outside of that government the administration of the sacraments is sterile and the reading of Sacred Scripture degenerates into intellectual and moral anarchy. Now, this Vicar of Christ, the supreme head of the whole Church, is the Bishop of Rome. Holy Church is therefore quite plainly Christian, Catholic and Roman.

A new expression and a new ecclesiology

If we follow this logic of Vatican II to the end, we must conclude that the unity of the Church is no longer understood as the unity of a social order, but rather as a number of elements of sanctification and of truth instituted by Christ. In the Catholic Church we have the fullness of those elements. But outside the Catholic Church, in the schismatic or heretical communities, we have some elements: not all, but a certain larger or smaller number of them. Although these limited elements cannot constitute unity, in spite of everything they are more or less close to unity: they tend toward it.

From this perspective, in which unity results from a quantity, the Church of Christ is more or less. She exists in her fullness and therefore she subsists in the Catholic Church; she exists in the state of partial elements and therefore, she is present and active in the non-Catholic Christian communities. And these elements, as they are found outside the Catholic Church, are true seeds of unity. Section 3 of the decree Unitatis redintegratio on ecumenism even goes so far as to say that the Holy Spirit has not refrained from using these seeds as true means of salvation, “which derive their efficacy from the very fullness of grace and truth entrusted to the Catholic Church”.

According to this logic, the Bishop of Rome is not the constitutive element of the ecclesial order, the pivotal point of the unity of the Church, the rock established by Christ upon which God builds His one Church. The Bishop of Rome now is only one element among others, and which is added to the others so as to accomplish with them the quantitative unity of a fullness.

A change of definition and not only of expression

The different expressions (the Church of Christ “is” or “subsists”) therefore correspond to two different definitions of the Church.

With the traditional expression “is”, and the reciprocity that it implies, the Church of Christ is defined as the one Catholic and Roman society, in other words, as the totality of all those who seek the same end (their sanctification and salvation), under the direction of the same authority (the Bishop of Rome, Vicar of Christ). This definition of the Church is based on the relation that exists between the members of the society and their head. If we change the terms of this relation, we change the definition: the relation that exists between some believers and a head who is someone other than the successor of St. Peter is no longer the relation that defines the Church. Setting out to describe “the heavenly ideal, and the divine exemplar, of the constitution of the Christian commonwealth,”

When the Divine founder decreed that the Church should be one in faith, in government, and in communion, He chose Peter and his successors as the principle and center, as it were, of this unity.... Hence the teaching of Cyprian, that heresy and schism arise and are begotten from the fact that due obedience is refused to the supreme authority. ‘Heresies and schisms have no other origin than that obedience is refused to the [Pontiff] of God, and that men lose sight of the fact that there is one judge in the place of Christ in this world’ (Leo XIII, encyclical Satis cognitum]

The Christian society willed by God is therefore one and the same with the Church of Christ and with the Roman Catholic Church, without there being any distinction between the two, whether a real distinction or a distinction of reason.

With the new expression “subsistit,” the Catholic Church no longer defines herself as a relation between the members and their head; she defines herself as a fullness, in other words, as a complete sum of elements. These elements are all found in her; some of them, but not all, are found outside of her, where they give rise to a presence of the Church of Christ. The Church of Christ is therefore more or less: she exists in her fullness and subsists in the Catholic Church; existing in the state of partial elements, she is present and active in the non-Catholic Christian communities.

The element that will always be lacking in all communities separated from the Church is the power of supreme and universal jurisdiction entrusted by Christ to His Vicar, the Bishop of Rome. This element is not just one element among others. It is a decisive element, in other words, a principle, the very principle of the Church’s unity. The other dissident Christian communities (Protestant, Orthodox, Anglican), no doubt represent (from a merely material perspective) a whole or a set of elements that belong to the Catholic Church.

But from the perspective of their definition, these communities are, with regard to the Church, in a state of privation, lacking in one absolutely decisive point, since they all reject the primacy of the Bishop of Rome, who is the very principle of the Church’s unity. The supposedly more or less perfect communion implied by the verb “subsistit” is a decoy and could not possibly correspond to any “ecclesial character”. Ecclesial character exists or it does not exist, and it can only be defined as a social unity of one part to another with a view to the same common good under the direction of one and the same authority. This unity of the Church of Christ is therefore identically, really, and exclusively the unity of the Catholic Church.