"The Society is essentially apostolic, because such is the Sacrifice of the Mass and because, as a rule, the members will have to exercise an exterior ministry." (Statutes of the SSPX)

Faith without works is dead
(James 2:26)

I call righteous someone who judges rightly and whose deeds do not contradict his judgment.... Faith and works must go together. But if you separate faith from good works, you kill faith. For without good works it is dead. Faith that does not work through love is but a dead corpse.

When Cain stretched out his hands to God, he lacked righteousness, because jealousy and hatred of his brother dragged his heart down. He was divided against himself, stretching out his hand to sacrifice but delivering his heart to envy. Disagreeing with himself, he could not attract divine favor. He had not yet killed his brother, but faith was already dead within him. For there is no righteousness in a man whose faith is dead and whose heart is empty of devotion and filled with bitterness.

If you seek glory, if you are envious, if you speak ill of those who are not present, if you render evil for evil, those are things that Christ did not do. But if you believe in Christ, then do the works of Christ, and your faith will live.” (St. Bernard)

The apostolate fo the members of the Society is inspired by charity and totally directed towards the good of the souls. This charity originates from prayer and from the Sacrifice of Our Lord on the Cross, daily offered during Mass. 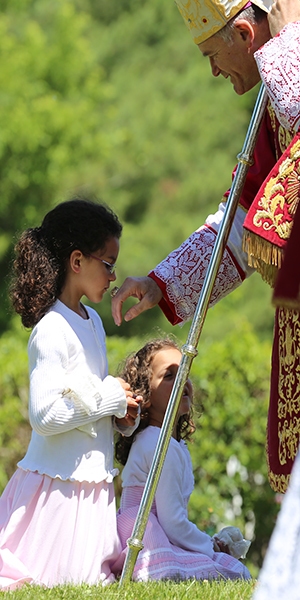